As predicted, Day Two of homeschooling was much more sedate. This was largely due to me being exhausted from Day One.

It’s hard work keeping small people fed, watered and amused AND doing ‘grown-up’ work at the same time, as I’m sure parents everywhere are now discovering (once again teachers, I salute you).

But education is important, which is why I pulled out all the stops to deliver a literacy lesson in a graveyard. and an impromptu call to the ‘police’ (thanks Lewis).

If you’re scrambling for ideas to keep your kids amused, you might find something of interest below. It may even be educational. But don’t hold me to either of those claims.

What you will need: Bread, Nutella, dried pasta and a Post-It note

Remember the food order menu from yesterday? I was going to cram in some morning reading practice by repeating that exercise. Then I realised I had back-to-back conference calls, so tasked Eric with sorting out his own lunch. The result was a Nutella ‘boat’ toast sandwich, complete with a dried pasta mast and a Post-It note sail, accompanied by enough dried apricots to give him the runs. Had this been a test in demonstrating his independence then Eric would have nailed it. Had it been a lesson in Physics he’d have bombed it, because that Nutella ‘boat’ had zero chance of floating.

What you will need: pen and paper; reusable container: magnifying glass (optional) 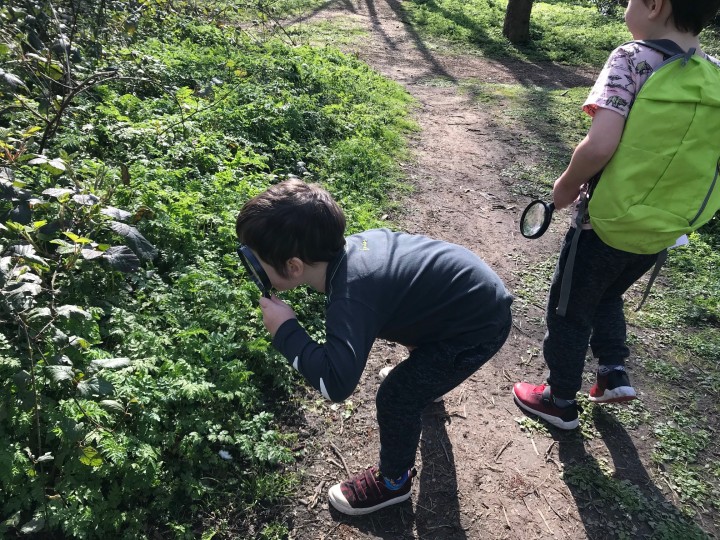 My original vision for this ‘lesson’ was for Eric and his brother to head to the nearby graveyard and find all the items on their detective checklist – the one I’d lovingly created, featuring half-written words that Eric had to read and fill in the gaps. As with most things involving children, it didn’t quite go to plan. We hadn’t even got past butter_ _ _ (buttercup) before Eric discovered a wooden spindle, after which the plan kind of went off piste. Eric then found a lanyard hanging on a bramble bush, complete with a photo ID card and a key, and insisted we spend the rest of the afternoon looking for a police officer to hand it to. On the plus side, Eric eventually found everything on his checklist and told me lots of fun facts about how trees can’t breathe if they’re chopped in half, and that it’s illegal to pick flowers so I shouldn’t have put them on the list. I countered this by telling him nobody likes a clever clogs.

What you will need: A gravestone or monument plaque

As we were walking through the deserted graveyard, looking for dock leaves, daisies, and a police officer, Eric stopped in front of a monument and asked what the words said. I challenged him to work it out. He stumbled a bit on ‘memoriam’ but otherwise he did quite well. That was until he reached the word ‘cholera (the monument marked a mass grave for the thousands of people in Hull who died from the disease), and Eric convinced himself he was going to catch it too. I eventually calmed him down by claiming to have seen a police officer walk past the graveyard entrance and he skipped off to investigate.

What you will need: A phone and a generous colleague

Half an hour after returning home and Eric was still bleating about the lanyard. “Mummy, this person might be dead. We really need to tell the police.” I didn’t want to curb Eric’s enthusiasm, nor did I want to listen to him talk about lanyards for the rest of the day. Fortunately, one of my work colleagues, ‘officer’ Jackson, agreed to step in and speak to him. Eric called ‘officer’ Jackson and shared every last detail about the lanyard – including the location of the bramble bush in which he’d found it, the ID number, the colour, and the fact its former owner worked in “the toilet shop” (it was actually a kitchen manufacturer, but I didn’t have the heart to correct him). Eric passed his citizenship test with flying colours, although he was a little upset that ‘officer’ Jackson would not confirm whether the aforementioned lanyard owner was dead.

What you will need: a book

Eric gets frustrated when he can’t do something like a pro. He finds reading quite a challenge, so getting him to read can sometimes be difficult. Not this evening, though. We didn’t even need to resort to bribery; he chose his own book, sat down and read it to me. I genuinely think the confidence he gained from reading gravestones made a massive difference. Or maybe he simply wanted some light relief after genning up on cholera epidemics.

What you will need: the Moshi Twilight app

We rounded off the day with some meditation. Or rather, I let Eric choose a story on the Moshi Twilight app. If, like Eric, your child struggles to wind down of an evening then I’d recommend giving the app a go. Eric has been listening to the same stories every night for months and he’s yet to discover what happens at the end of any of them, because he’s out for the count in minutes – a vast improvement on the hours we used to spend trying to get him to go to sleep.

So, that’s Day Two done. How many days to go now??