I didn’t feel too bad, because I did throw in a couple of activities that involved human interaction.

Also, I’ve booked tomorrow off work and will therefore have a full day to dedicate to one-on-one learning. Or maybe I’ll just drink wine in the garden, who knows.

If you’re finding it exhausting to find ways to keep the kids amused and educated at the same time, you might find some inspiration below.

Most of today’s activities require minimal effort on your part –  perfect if you’re working from home, or simply need to cling on to some sanity.

Ever since Eric started school he’s been going on about ‘Move It’ sessions. I’ve never been able to fathom what he was wittering about – until today. I’d assumed it involved running around the school hall, throwing bean bags into a bucket or walking on upturned benches, which is what my childhood PE lessons looked like. It turns out that ‘Move It’ consists of music videos on YouTube, featuring animated characters who teach the dance moves to a song, step by step. Eric chose Eye of The Tiger, Old Town Road and a couple of other tracks, the names of which escaped me. He wouldn’t let me join in, which was just as well; I was laughing so hard at his cowboy moves that I was unable to peel myself off the sofa.

11am: History, Geography and Biology

What you will need: You Tube (you’ll notice a trend starting to appear here…)

Having used up all his energy pretending to be a cowboy, riiiiiiding until he can’t no more, Eric went back to bed. Bear must have been exhausted from watching Eric’s Move It session because he joined his slumber party too. The pair of them scrolled through YouTube, beginning with a documentary about abandoned vehicles in Russia before moving on to the World’s scariest sea creatures and ugly fish, or something like that. I count all of these as educational – particularly as Eric took great delight in explaining to Bear and I what a blobfish does, and the fact cowfish have teeth and beaks. To prove I wasn’t a total copout, I pulled out Eric’s world map and together we marked places of interest that were linked to the videos.

What you will need: A pen and paper 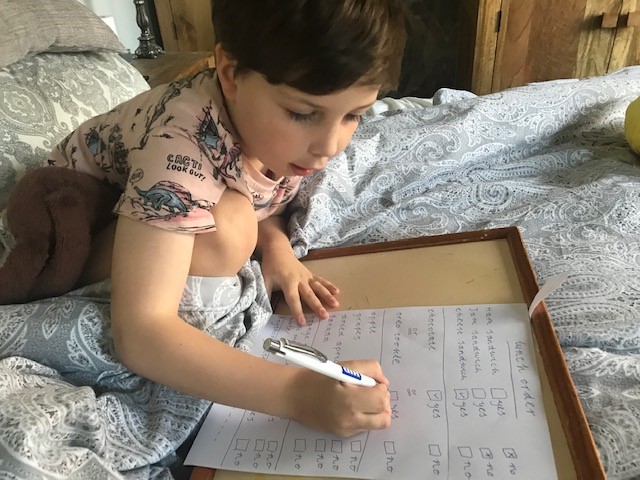 The food order menu from Day One made a reappearance, allowing Eric to choose his own lunch. This had two benefits. Firstly, it reminded him how a pen works (because his lack of enthusiasm for writing is putting him in grave danger of forgetting). Secondly, it meant that when I served up his lunch he didn’t have a meltdown and start screeching “I didn’t want this!”, which is what often happens when I present him with food.

What you will need: A pillowcase and no clothes

Throughout the day I had to make various work-related calls. Trying to find quiet places to take said calls was proving increasingly difficult. I escaped to the bedroom where I thought the boys wouldn’t find me. Halfway through a video call, Bear bounded in and declared “there are sharks in here, agggghhh!”. This was bad enough, but the fact he’d removed all his clothes made it slightly harder to ignore. I initially tried to pretend it wasn’t happening. Then Bear climbed into a pillowcase and began bouncing around like he was a front runner in a sack race, stopping every now and then to say ‘hello!’ to himself on the camera, at which point I simply accepted conference calls are never going to be the same again.

3pm: Agriculture (it was meant to involve writing too, but that part didn’t go to plan)

What you will need: seeds and pots

I had high hopes for this ‘lesson’. It involved mud, water and sunflower seeds. Surely no child could resist? The mistake I made was pitching it to the kids as “a really exciting game in which we write the names of the flowers on these lolly sticks, and then put them in the ground where we plant the seeds”. Eric promptly threw the lolly sticks on the floor and declared, “that’s a rubbish game”. I quickly repositioned it as “a fun game where we fill these plant pots with compost and then put seeds in them”. Removing all references to writing appeased Eric. He and his brother spent the next hour tipping compost around the garden and watering the kitchen floor. I have no idea whether or where they actually planted any seeds, because the lolly sticks were still on the grass where Eric had thrown them. But it did give me an hour of peace to crack on with some work.

What you will need: A deserted street/road 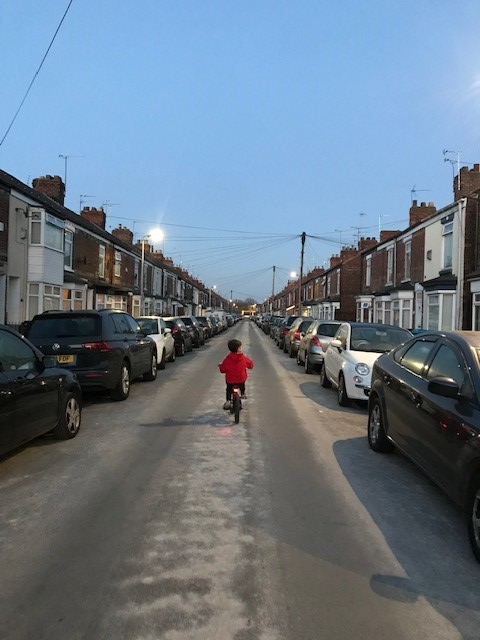 The boys were itching to leave the house, so when dusk fell we took advantage of our ‘one visit outside per day to exercise’ allowance. We let the children lead the way, which meant daddy ended up back in the graveyard with Bear and I ended up chasing Eric down deserted roads. It was so quiet that I let Eric ride his bike on the road – a smll act that made him giddy as a kipper. I also used the opportunity to test him on his knowledge of how to stay safe during the lockdown. If you saw a parent and child running past your window shouting, “how many metres do you have to stand away from other people?”, “two!”, and “how many feet is that?, “six…so just a bit longer than if daddy laid on the floor!”, then that was us.

So, that’s three homeschooling days down; just two more days until the weekend. But let’s face it, the days are all becoming a bit homogenous at the moment. Without a weekly trip to softplay or Rock Up as a compass, I’m at a loss to see how the weekend will feel any different from a weekday.

If you have any ideas for how to keep the kids amused and the adults sane then I’d love to hear from you.

One thought on “YouTube, mud and Billy Ray Cyrus: Day Three of homeschooling is a hit”