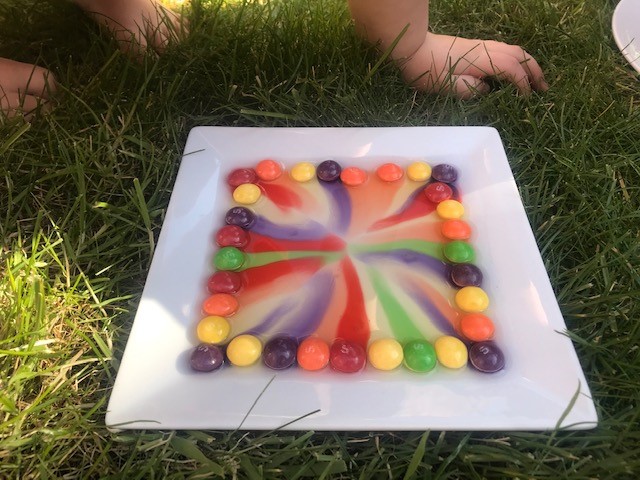 Today’s my birthday. Eric and Bear were planning to wake me up with breakfast in bed and a homemade card. They must have got distracted because I didn’t wake up to either.

They did ask me if I would make their breakfast, which I guess is near enough.

Fortunately, my partner is more thoughtful and brought me a coffee in bed. This was probably to make sure I was awake and would therefore not be shirking my parental duties just because it’s my birthday.

Coffee in hand, I went downstairs to kick off Day Four of lessons during lockdown.

Before you read any further, I kindly request that you don’t judge me for the fact my son still hadn’t picked up a pen by lunchtime.

Watching the news on TV leaves me struggling to carry on as ‘normal’, so it seems only fair I cut the kids a bit of slack if they don’t want to sit at a table and do maths.

Offering my sons reassurance therefore took priority over ‘work’. Plus, we did an afternoon of science, most of it by accident, but still. I’m taking it as a win.

Here’s what we got up to:

What you will need: A Smart TV and iPhone 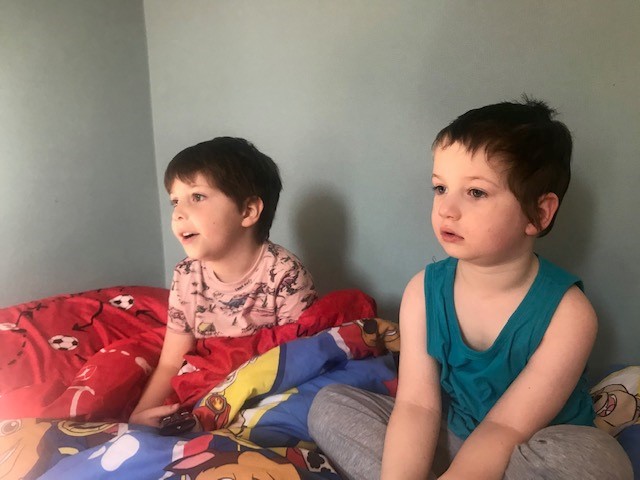 Digital distractions started early this morning, because I was busy opening my presents and watching Boris Johnson’s video message to the nation. Bear opted for NumberBlocks on BBC iplayer, which I felt was a wise choice. Eric opted for Jelly on YouTube, which lasted less than a minute before I realised it featured guns and fighting, so switched it off. The alternative was ‘Ten Sightings of Mermaids, and other Maritime Myths’. Not strictly educational but far better than warfare. Eric soon grew tired of mermaids and turned to watching NumberBlocks with his brother.

What you will need: The patience of a saint

By 10.30am a fight had erupted in the living room. Eric and Bear were squabbling over how many different number bonds added up to 12. Bear has no idea what a number bond is, on account of him being only three years old, but he wasn’t going to let that get in the way of standing his ground. The result was full-on fisticuffs, followed by a ten-minute lesson in how to be kind to each other and share a sofa – without punching each other or breaking each other’s toys.

What you will need: Something for the children to stand on so they can reach the fridge

After a week of waiting on the kids, I gave them the opportunity to assert their independence in the kitchen. The problem was they could barely see above the worktops, let alone reach them. Undeterred, the boys worked together to push Bear’s mini table and chair into the kitchen, giving them free access to all of the cupboards. It was a bit hairy watching Eric climb up to the top cupboard to grab a bag of crisps. And they poured more milk on the floor than in their beakers. But otherwise all went well. Until Eric offered to peel and chop Bear’s apple, at which point I figured I’d best go and lend a hand, before one of them lost a finger.

What you will need: Skittles (or any other coloured, sugar-coated sweets), hot and cold water, and white plates 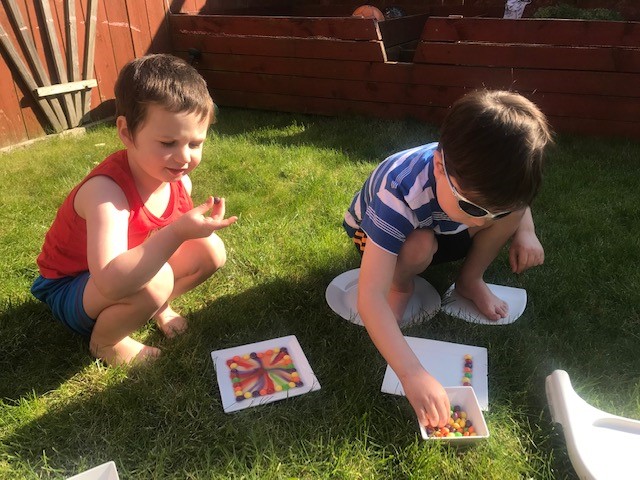 I’d had this experiment on my to-do list long before the lockdown started. I’d seen photos of it on twitter from my son’s school science club, and had stashed a family bag of Skittles in the cupboard in preparation (I’d hidden the bag at the back of the tinned pulses cupboard – nobody ever looks in there, so I knew it’d be safe). It went even better than expected. Not only does the experiment look fab, it also prompted lots of thinking and talking. The boys were soon improvising their own experiments off the back of it. I’d have preferred them not to start putting Skittles in the cafetiere or pouring sugar water on the bedding plants, but who am I to stand in the way of enquiring minds? I had created an accompanying worksheet, using questions and hints taken from this fab science website. My hope was it would encourage Eric to do some writing. Eric was not enthused about the worksheet and spent the rest of the afternoon ignoring it.

What you will need: Ice cube tray, a freezer and a kettle.

From what I can gather, Eric had seen an episode of Loud House in which the boy character (forgotten his name) tries to wake himself up by dunking his head in a bucket of iced water. At least, that’s the only explanation I can find as to why Eric suddenly decided he wanted to make ice. My efforts to get him to pick up a schoolbook were proving largely futile, so I figured I may as well run with his request and turn it into a mini science lesson. Eric filled one ice cube tray with cold water, I filled another with freshly boiled water. As we put them into the freezer, I asked Eric which one he thought would freeze most quickly, whether the water would contract or expand – basically the kind of questions I remember being asked when I was at school. Considering how many years have passed since I was at school, I’m quite amazed my brain managed to retrieve anything from back then.

What you will need: Rubber gloves, washing-up liquid and a sponge

With the ice sorted, Eric starting searching for a clean bucket to put it in. Having filled all our buckets with mud during Day Three’s activities , he was forced to dig out some rubber gloves and washing-up liquid and start scrubbing. It was at this point that I started wondering what excuses I could come up with that would stop Eric from sticking his head in a bucket of iced water and making even more mess – particularly as he’d gone to so much effort with the preparation.

What you will need: Some hazy recollections from your school days. Failing that, use Google.

Eric was amazed to discover the boiling water in the ice cube trays had frozen faster than the cold water. I explained about the energy that came from heat, and how this extra ‘power’ made it freeze more quickly. I may have mixed up my facts, however a quick scoot on Google suggests even Aristotle failed to put forward a convincing theory behind the science, so I can be forgiven for not really being able to sum it up. It didn’t matter anyway, because Eric was less focused on the Mpemba effect  (Google it. I had to) and more bothered about when the rest of the ice would be ready for his bucket.

What you will need: A friend who has already completed some of their school activity book

One of Eric’s friend’s mums messaged me a photo of the worksheet her son had completed. I showed it to Eric, hoping it would encourage him to follow suit. It worked like a dream. He raced outside to find his Skittles science worksheet – the one he’d discarded on the grass almost seven hours previously – and brought it into the living room where he filled it in. I messaged his friend’s mum back and requested she keep sending photos of her son’s work, because it had proved much more motivational than any of my cajoling.

If you’re wondering whether Eric got around the sticking his head in a bucket of iced water then yes, it did happen. I’ve still no idea why. All Eric can add to the discussion is “I needed to cool down after my dinner”. Fair enough.

And that, my friends, is Day Four in a nutshell.